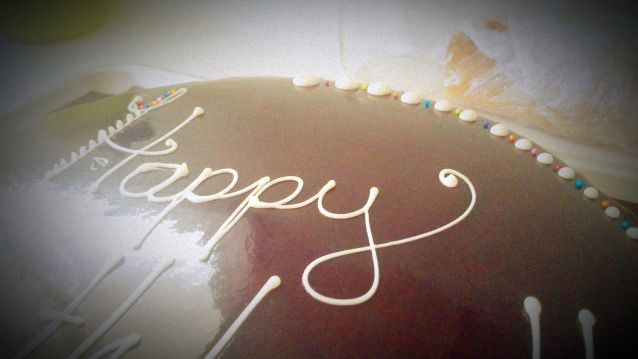 Today I ate the most delicious bagel of my life. Surprisingly, it was a dempsters bagel. The 12 grain ones. I slathered that tasty thing in peanut butter and a bit of honey. So good.

But that’s only mildly important! On friday I made a wicked cake, because it was my brother’s birthday, he is now 28. What an old pants! Obviously I had to make a cake, right? Right. I wanted to make something ridiculous and decadent. So then what’s better than chocolate+peanut butter+cheese cake? Probably not too many things. I don’t really have any nice pictures of it, I got lazy and was too excited to eat it to take the time to attempt to take a nice picture, ha. There’s a picture of the inside at the very bottom of this post, once you get passed all the recipe junk.

I went with one of my favourite chocolate cake recipes that I forget where it’s from. I used the liquid cheesecake recipe from the book Milk of the Momofuku Milk Bar, and the peanut butter mousse I kind of just made up…our little secret okay?  I only used one of the 8″ chocolate cakes, and used two 3/4″ thick pieces of it. I remember trying to halve this recipe previously with sub-par results. You can always freeze the extra cake, or make more of the peanut butter mousse and liquid cheesecake and make a super dooper tall cake. Or two cakes. Or cupcakes? Do whatever your heart desires! I’m going to list all the ingredients of the components first, then go through all the assembly so it’s easier to follow. Here we go!

I need to work on my piping…so crooked! I blame it all on the chocolate though, low quality chocolate isn’t as fluid as higher quality chocolate okay..so it doesn’t pipe as well..yeah..that was the problem..Look at that meticulous coloured sprinkle placement though, these shaky hands can still do a good job on some things. Err, let’s get back on track here now Tara.

Preheat your oven to 350F. Grease and line two 8″ round pans with parchment paper.

In the bowl of a stand mixer whisk together the flour, sugar, cocoa, baking soda, and salt. In a separate bowl, whisk together the eggs with the oil. Then whisk in the buttermilk, coffee and vanilla paste. Pour the liquid into the dry and whisk on medium speed for about 2 minutes.

Divide the batter equally between the two pans and bake for about 20-25 minutes, or until the cake springs back when gently pressed in the centre. Or if a toothpick inserted in the middle comes out clean. Or if elephants come stampeding through your kitchen in which case you would probably be running away so for sure remember to take the cakes out of the oven then…or at least turn the oven off.

Line a tray with parchment paper, then place an 8″ cake ring in the middle. Cut a strip of parchment to line the inside of the ring. Pour the cheesecake into the ring, and bake for 15 minutes. When it’s done, the sides will be set but the middle will be slightly jiggly still. Perfect!

Cool the cheesecake and then place in the freezer, otherwise you’ll have a very difficult time during assembly.

Whip the yolks and sugar over a bain marie until light and fluffy, and when you stick your finger in it it’s too hot to keep in for more than a few seconds. About 55C. Let cool. Melt the peanut butter with the peanut butter chips and 1 cup of the cream. Dissolve the gelatin into this mixture. Gently fold the yolks and peanut butter mixture together. Stir this gently over an ice bath until cooled, it will also slightly thicken. Meanwhile, whip the remaining cream to medium-stiff peaks.  Sacrifice a little bit of the cream into the peanut butter mixture to lighten it up a bit and make it easier to incorporate into the fluffy items. Now fold everything together, gently. Make sure there are no streaks.

In a 9″ cake ring lined with tall acetate or parchment paper and a cake board on the bottom, place one of the cake rounds in the centre.  Pour about 1/3 of the mousse. Give the pan a gentle tap to jiggle things into place. Place the semi-frozen cheesecake on top of that. Don’t press down too much or you’ll just be squishing it onto the top of the cake layer. Then pour another third of the mousse. Gently tap the pan on the counter again, then place the last cake layer. Pour the rest of the mousse, another tap on the counter, and then gently smooth/level out the top with a small offset spatula if needed. Place the cake in the fridge to set up!

If you want, you can make a glaze of sorts for the top. Here’s the one I made.

Bloom the gelatin in some water and bring the rest of the ingredients to a boil on the stove.  As soon as it boils, take it off the stove and stir in the gelatin. Strain into a bowl and cover directly with plastic wrap. Let cool to a neutral temperature before using. You don’t want to be pouring a hot glaze on a cake that’s just been in the fridge or it will melt, nor do you want to pour a cool glaze on a frozen cake, or it will set up way too fast right? right. CAKE!

I also got a new tattoo the other day. A friend and I woke up feeling in the mood for new tattoos. So we went and got them done. Cool beans!