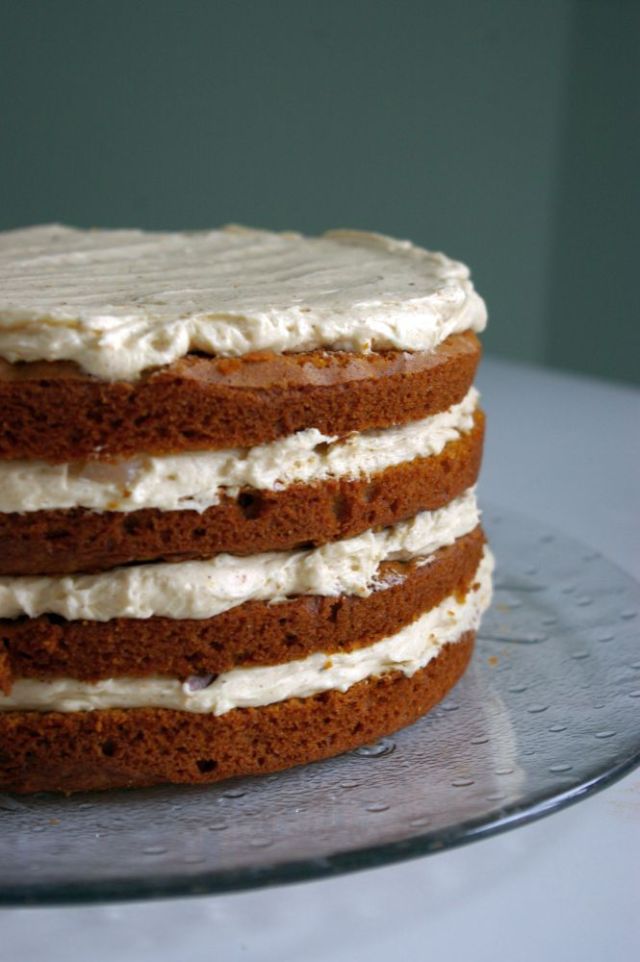 Yesterday I was once again in the cake baking mood (surprise!). I rummaged through the cupboards looking for inspiration and found a can of pumpkin puree. Yum! I haven’t made a pumpkin cake at home before so I thought I’d give that a go. The usual search on the internet for the perfect recipe that made sense commenced, and I spent about 2 hours before finally choosing one. I didn’t want it to be a heavy cake, I wanted it to be light and fluffy and moist and dreamy. Once I had chosen my recipe, I realized that I didn’t have any butter. Of course! So I had to take a little trip to the grocery store.

Let me just tell you that driving in even the slightest bit of snow, even with snow tires on, results in fish-tailing all over the damn road when starting from a stop sign. It’s kind of hilarious, I don’t even go fast. I can see how rear-wheel drive would be fun in the summer but in the winter I hate it. I risk my life for a few pounds of butter to fuel my baking addiction.

So back on track, at the grocery store I see the most perfect pears and realize I have to buy them. They were red anjous and so perfectly ripe that I could smell them from my basket during my grocery-store-trot. I also saw mascarpone cheese and realized I obviously had to get that too (didn’t end up using it haha). So far so good. Except wait, I came here for butter. So off to the dairy aisle I go. Oh look! There is only one brand of unsalted at the moment, and it’s the most expensive one. I ponder it for a moment and decide that I’m not going to risk death and drive to another store to save a dollar or two. There were these two girls staring at me while I pondered. I grit my teeth and throw two pounds in the basket and quickly prance away with my heavy basket like a weirdo. Here’s a picture from google of some red anjou pears! Aren’t they beautiful? 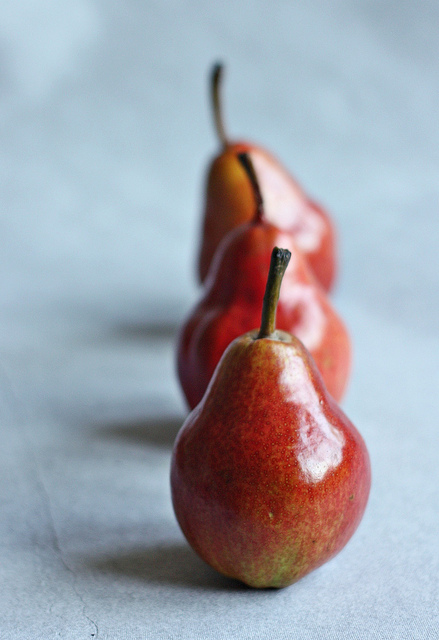 Back at home, I decide to brown one pound of the butter for the icing. Throw in a vanilla bean? Why not! The house smells amazing as the pumpkin cake is baking and the brown butter is brewing. Delicious. My dad asks if the only reason I came home was to kill him.

The icing I used on this cake was a german buttercream. You probably know what it is, but didn’t know it had a real name like me. Those buttercreams that start with a cooked custard base are german buttercreams! And they are delicious. Now that I think about it, they are basically mousseline buttercreams. Pastry cream+butter=yum! I love winter, because when I’m baking and am in need of a blast freezer I have a huge one right outside the door. Need to cool down  some brown butter? Put it in a dish in the snow! Need to cool down pastry cream? Wrap it up in saran wrap and put it in the snow! Just make sure no nosey dogs are trying to eat your products. Foster really likes butter and pastry cream.

Almost forgot about the pears! So while things were chillin’ out in the snow I diced up two of the pears and..semi-poached-semi-steamed them in a bit of white wine. I had no idea what the hell I was doing all I knew was I wanted them in wine. I let them hang out in the pot for about half an hour until they were tender but still had a bit of crunch to them to add texture to the finished cake. Yum.

I’ve noticed lately that I am liking the looks of not icing the sides of cakes. Maybe it’s just laziness though..haha. I like how it looks more rustic and easy going yet pretty at the same time. Can a cake be easy going? Well they can now.

I waited until this morning to take pictures of the cake so that they wouldn’t look like complete crap. I may or may not have had cake and coffee for breakfast. What. Don’t look at me like you’ve never done it. The cake by itself is so awesome, you could eat it with just a dusting of icing sugar on top. So moist, so flavourful, so awesome. When I tasted the buttercream after first making it I wasn’t sure I made the right choice of browning the butter. Don’t get me wrong it tasted amazing, but it felt too rich, too heavy. But then I doctored it up a little bit and when paired with the cake it’s actually quite awesome and not heavy at all. I’m not sure if letting it sit over night did anything but I like to think that it allowed the flavours to mellow out a little bit. I also really love the texture that the pears give to every bite. 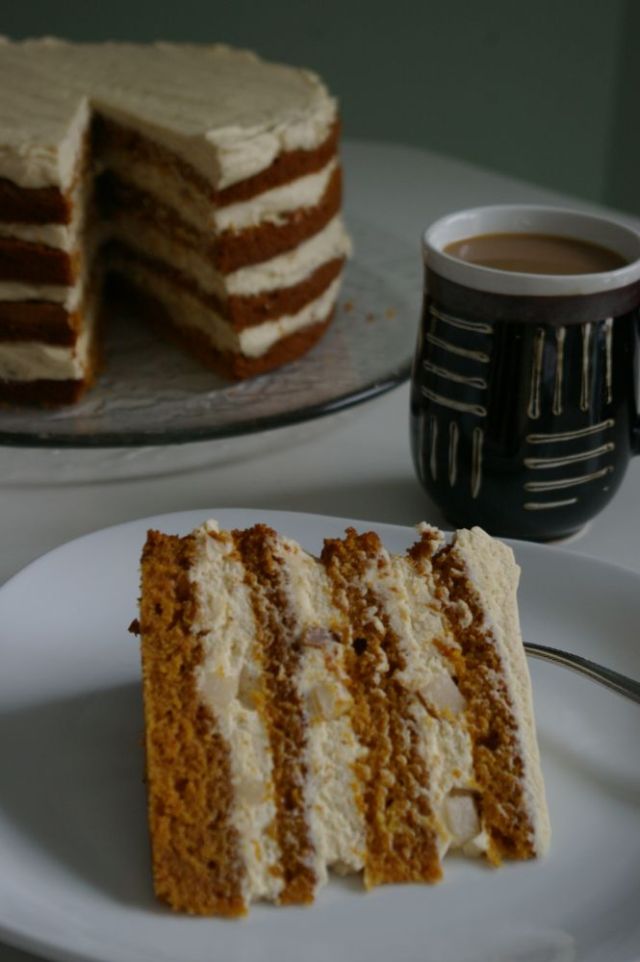 Preaheat oven to 350F. Grease and line the bottoms of two 8″ round pans with parchment.

In a mixer with the whisk attachment, whip the sugar with the oil, eggs and vanilla on high until light and fluffy. Add the pumpkin and whisk til combined. In a separate bowl, mix all the dry ingredients. Switch to the paddle attachment and add the dry ingredients and mix just until everything is combined. Finish with a spatula if you need to but don’t overwork the batter.

Divide between your two pans and bake for about 30-35 minute or until a toothpick inserted into the middle comes out clean and the cake springs back when gently pressed in the centre. Let cool in the pans for about 10 minutes and then invert them onto a cooling wrack to finish cooling.

(adapted from BraveTart!) **Double the recipe if you want to mask the outside of the entire cake.

In a pot melt the butter and add one vanilla bean, split and seeded and continue to cook until it turns a nutty brown. Keep an eye on it because it can go from brown to black pretty fast. You can strain the butter into a bowl if you want but straining isn’t required. Set aside until solid again and room temp.

In a pot heat the milk with one tablespoon of the sugar until almost boiling. In a bowl, whisk together the rest of the sugar and cornstarch. Whisk in the egg and yolk until smooth. Once the milk is just about boiling, pour into the egg mixture and whisk til combined. Return to the pot and continue to whisk over medium heat until the mixture boils and thickens and then continue to cook for about half a minute more. Pour this mixture into a bowl and cover the top directly with plastic wrap and cool in the fridge until cold.

Once the mixture is cool, whip until creamy and then add the butter. Whip until light and fluffy. Add the salt. Yum!

I also threw in about 5 ounces of cream cheese, a tiny bit of orange zest and a tiny bit of icing sugar to get it back to the consistency I wanted.

If you want to make this without brown butter, steep the vanilla bean in with the milk instead and continue with the recipe as normal with just plain soft butter.

Cut the pears into a small dice, keeping in mind that the pears go in between layers of cake. Throw into a pot and add the white wine (and optional vanilla bean), put over medium-low heat with a lid until the pears are soft but still have a slight bite to them. When mine were done there was about a tbsp of pear/white wine syrup in the bottom of the pot. So good.

Cut each cake layer into two so there are 4 layers. Layer them with buttercream and then 1/3 of the pears, make sure you press them flat into the buttercream. Continue layering. Eat! 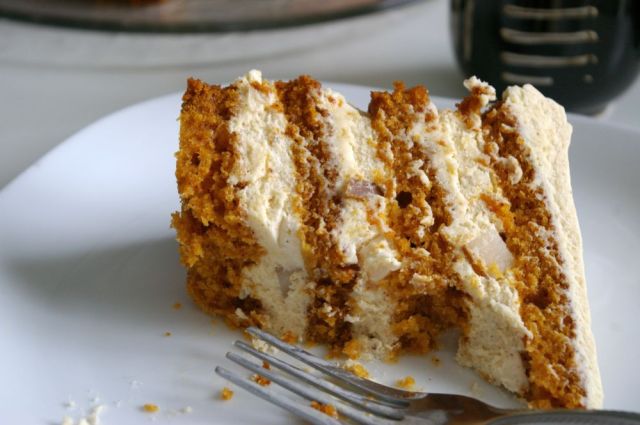