And I couldn’t be happier! I won’t go into detail about what a huge ********** the owner is, but let’s just say that he made me question if this is what I should really be doing with my life. Negative thoughts and countless tears are not how I want to remember any job. Oh shoot, forget not going into detail. Let’s take a trip down memory lane, with a few choice quotes from his awesome self.

“are you even educated?”  this one was not directed to me. But seriously….WTF.

“it’s common sense.”  He had a quota of saying this 10 times a day, I swear. Everything to him is common sense, even though it’s really not and he’s just really stupid.

“I don’t understand why you can’t do this. They train mexicans to do this better. Now our croissants are shit. Now we’re just like everyone else” (this one wasn’t directed towards me but seriously, what the hell man. I was standing right there and wanted to punch him in th face. Who the flying shit says that to their employee? Making them feel stupid is not going to make them work better. I don’t understand his brain.

“This cake isn’t nice. It looks like shit. You guys need to be more careful, I mean how would feel paying $50 for this cake? It looks terrible (hahah I WOULDN’T because your cakes are shitty and always tacky and ugly! also he was the one who glazed the cake, so he was yelling at us for nothing.)

“Why aren’t these doughnuts out yet. It’s almost 9am. It’s not fair to the customers that they don’t get their doughnuts because you burnt them. This isn’t acceptable. Don’t burn the doughnuts. It’s common sense.” (Only 4 of the 48 ended up burnt. Meanwhile I was rushing my ass off to take care of the baking, finishing things for retail, finishing a cake order, and mixing brioche. I wanted to punch him in the face. He would say these things as if I didn’t know. SO FRUSTRATING ARRHGHGHGHGHG. And the doughnuts get terrible reviews on almost any review site. You know why? Because they suck and their fillings are gross.

“8 hours? So what if you worked 8 hours most people work at least 10 hours a day”. I fucking lost it. I couldn’t deal with him anymore. I yelled at him, IT’S NOT LIKE WE GET PAID FOR IT. Because we didn’t. We were forced to be on salary, didn’t get paid for any extra hours we worked, and not once in the 3 months that I worked there did I ever get a break. Ever. Can you say illegal much? I can already feel how much less stress I am carrying around with me. My comment back to him ended my job like so,
Him: “well why don’t you just go home then, I’ll finish your job.”
Me: “Gladly.”
Him: “And don’t bother coming back tomorrow.”
Me: “I didn’t fucking plan on it.”

And then I stormed out. And went to a job interview hahahaha. I LOVE MY LIFE.

Sorry for the language but I fucking hated that man and anything and everything to do with him. I would not be sad to see that he died in a bakery fire or some sort of horrific accident. I am not saying I want to kill him, just that I wouldn’t be sad. 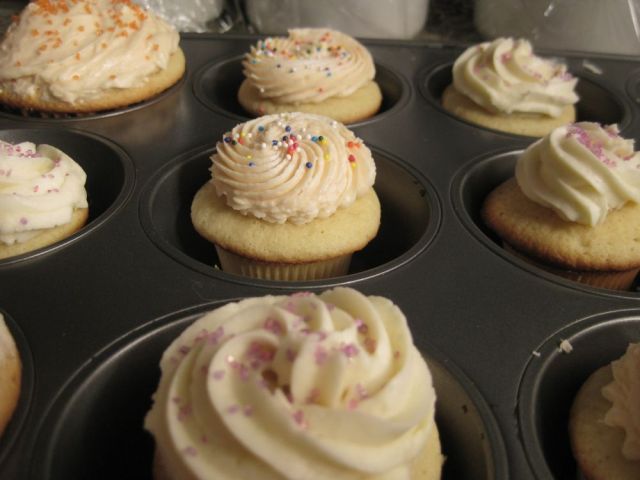 The one good thing about working at that hell hole is someone I met. A destined friendship if you will (how lame! haha) but now we have both been fired. (She was fired the day before me, so they pretty much screwed themselves over which makes me really happy.) After working together for about a month, we realized that we had actually met before at a Hardrock Cafe back in July of 2009. How crazy! And now we’re pretty good pals. And we’re settin’ up a little somethin somethin to sell some our baked goods around town. Garage sales, farmers markets, things like that. It’s pretty exciting. I’l post about the delicious things we make. Lots of pictures, I swear. Pictures are fun. I like pictures. Don’t you like pictures? Good. The picture up there is a really lovely little vanilla cake with orange blossom frosting. Pretty good. I promise to find more things to post about. Promise.